LOSING NOTRE DAME > APRIL 15TH> 2019 > The strangest thing is that I created the  image below in January 2019, and took the photos below that image on March 14th 2019, and then suddenly, on March 15th 2019, after the fire, a large part of the small rose window was gone.  The fluid nature of time, and the impermanence of things. 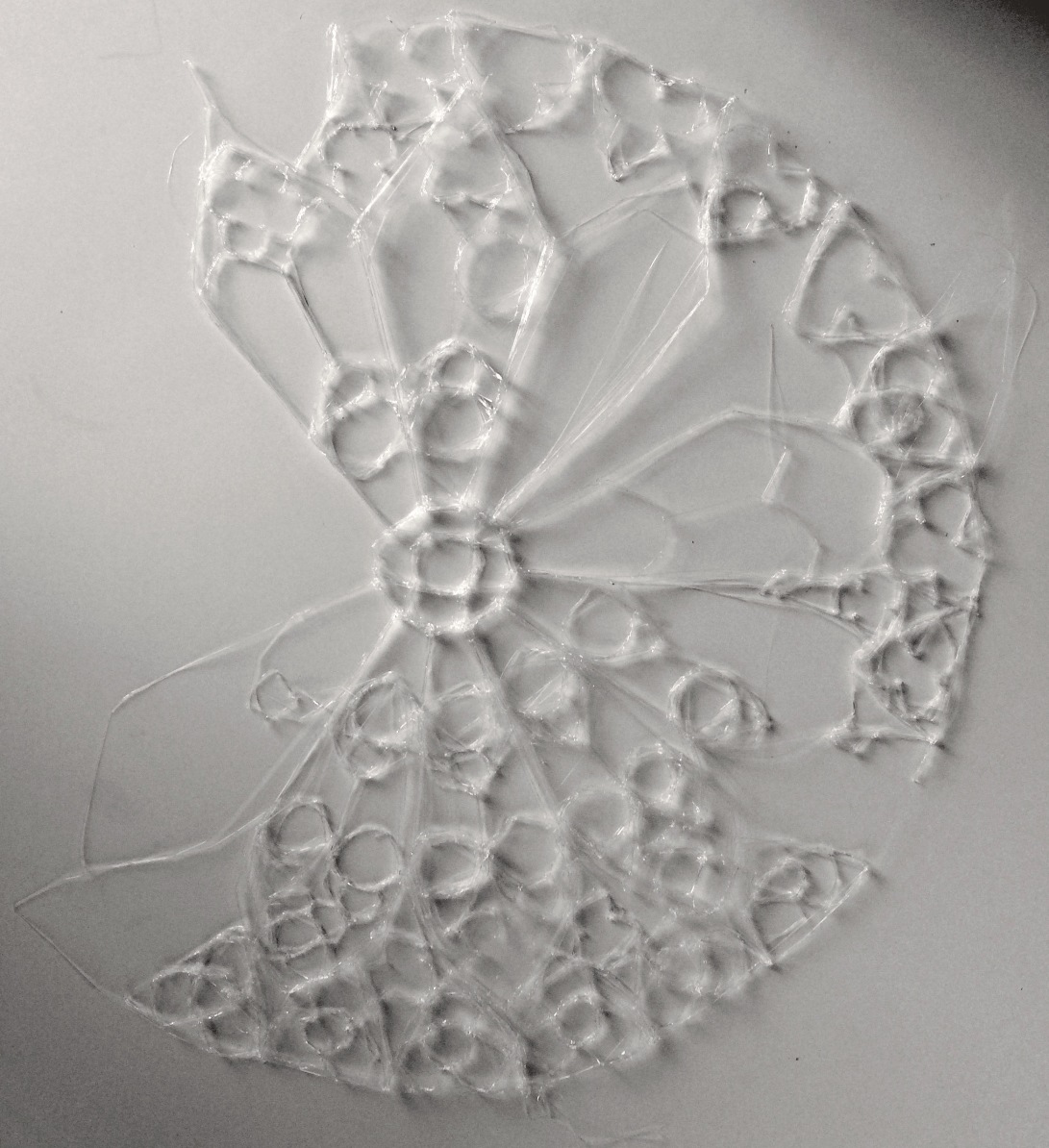 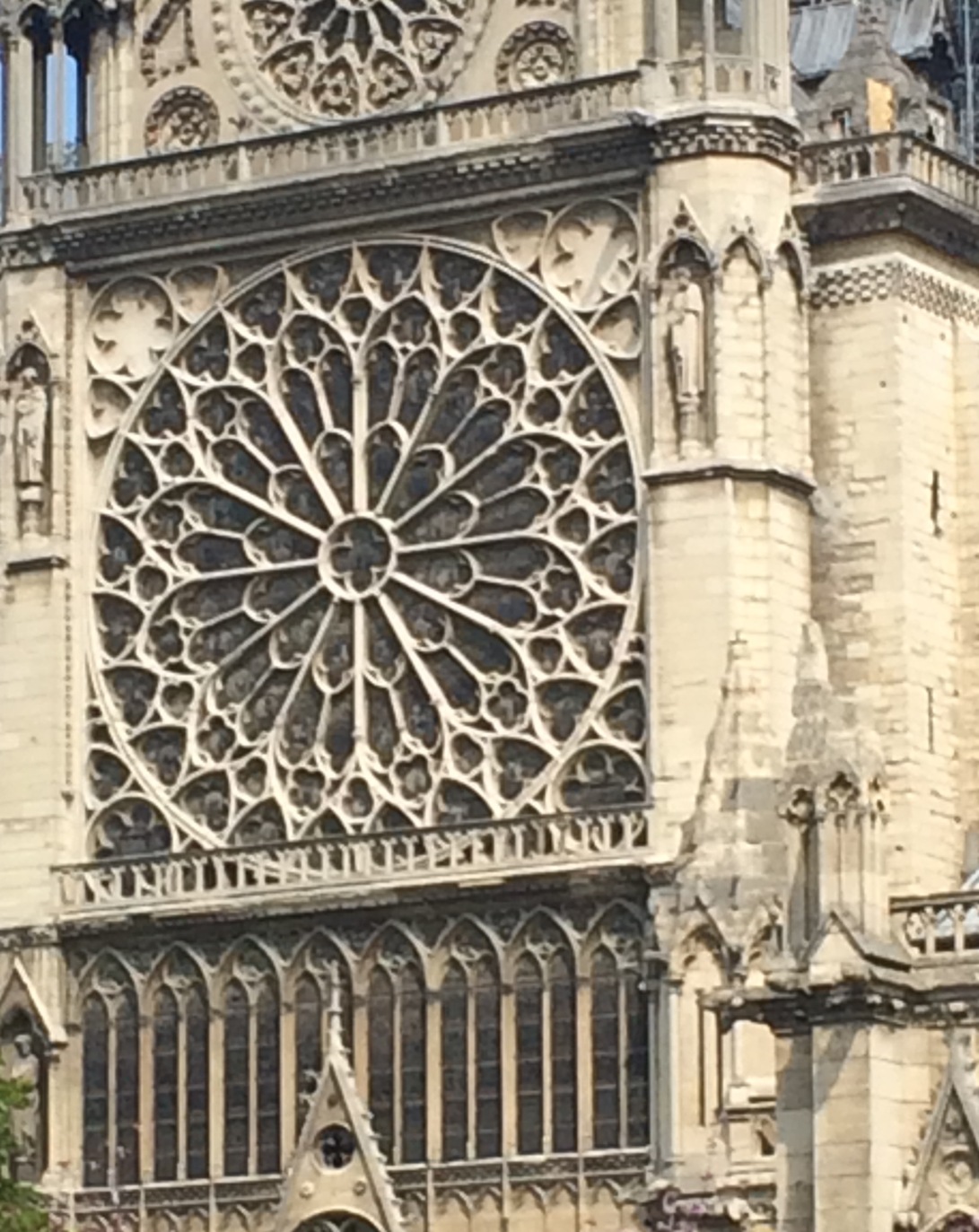 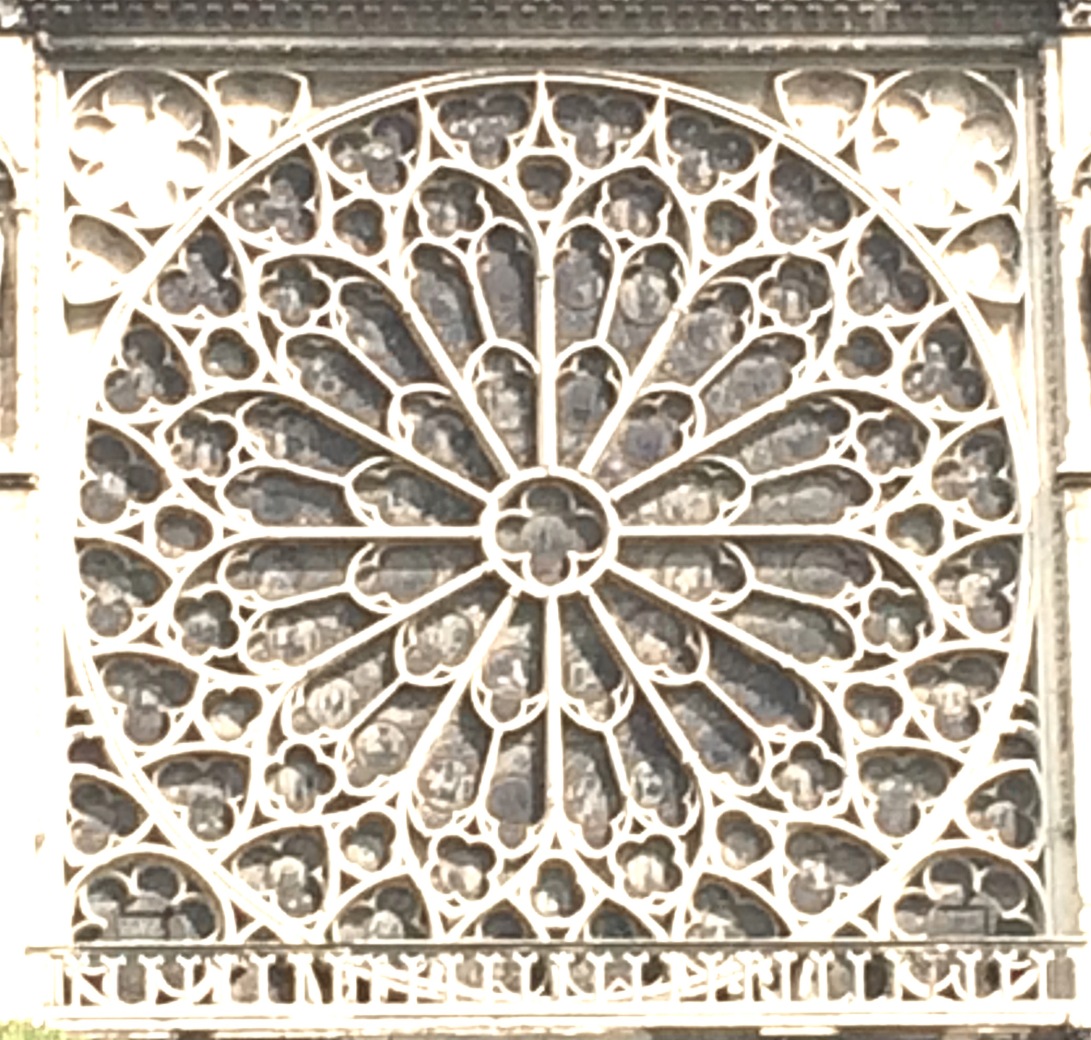 and these on March 15th. 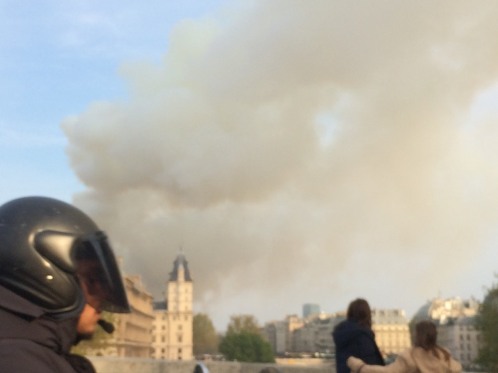 Riding in a taxi from school I saw a giant plume of smoke above the Seine. I said ‘oh my god’ Notre Dame is on fire. Everyone else in the taxi said ‘no it isn’t’. Their response was simply disbelief, who could imagine that an 800 year old structure could be in the process of burning, it had been there forever, and now, on fire? Mais non, non non non. As we crossed the Pont Neuf it became clear that yes, Notre Dame was  indeed burning.

On a personal level I felt a sense of panic at losing something that had been one of my touchstones since my first visit to Paris in the 80’s on a backpacking trip. They say the first time you see something is the only time you really see it, and it’s true. After that first encounter though, I’ve had the great fortune to see her many times. I have sat in front of those ancient stones and sketched her in all kinds of weather,  climbed her million stairs to gaze out over Paris, and marvelled at the mysterious gargoyles. And just last Christmas we had the chance to be there for a concert by candlelight, of voices from all over the world echoing off her ancient stones.

And then on April 15th as day slipped into night, walking towards her, not knowing how much the fire had grown, it felt strange to imagine losing her. And I realised I was not alone in my feelings. Pressed in by hundreds of people, tears in their eyes watching as a building burned, and it wasn’t just the building burning, it was parts of my / their histories,  our collective histories contained in those stones. It was parts of their memories burning; the first school trip, walking past her in the spring, in the snow, as sirens wailed all around in various recent crises in Paris, it was my first sight of her, and someone else’s first communion, it was everyone’s memories of her, there hanging in a balance as the flames leapt, and the smoke billowed, and les pompiers fought hard. At one point I marvelled at a firefighter hanging in the sky over the Seine, suspended mid -air firing water at the flames. Like a high flying trapeze artist, but in this performance, no safety net, and so much to lose. How much his arms must have ached.

As the sky darkened the streets filled, and the voices around me repeated, ‘putain, c’est pas possible’, ‘mais non non non’. It became a chant, non non non. There was a sense of urgency, clearly no one could imagine losing her. To be there in that crowd of people crying, praying, chanting, singing, and more praying, it was easy to understand how much that building meant to everyone.

As I went to sleep that night I tried to imagine Isle de la Cité without her, and I couldn’t imagine that ‘place’ without ‘those’ towering stones. But it also gave me the proof of something that I have been feeling for a while, certain buildings are like anchors in time. And we humans who walk through the streets of this or that city reflect our lives off the walls that contain us. And some walls, some buildings in our landscapes are more present than others, they resist the forces of nature, they remain, and when we are standing in front of them we feel our own mortality in the physical world. A feeling of smallness, of the passage of time, that before we arrived, and long after we are gone Notre Dame will still be standing. And perhaps this awareness reminds us to take note of how much time has passed, and how much is left to live. And so, some monumental buildings have a function in our lives, they become chronotopes. And no matter what those stones may represent, they measure our days, and in 800 years Notre Dame de Paris had measured 292,000 days for countless generations. As I went to sleep that night I really hoped that in the morning the towering stones of Notre Dame would still be standing.  And although the fire burned through the night, les pompiers fought hard, opening every water valve in the heart of the oldest part of Paris to save her, and all our histories.

Night became day, and  in the gray morning, it was a relief to walk up to ile de la Cité, and see the massive facade still towering over the tiny island of time. And although the scaffolding was twisted, and melted, and the roof was gone, and the beautiful glass of the small rose window no longer existed, her mighty facade remained, her structure was intact, and with her, our collective memories remained intact, and we breathed a collective sigh of relief that she  was still standing and would continue to contain our collective histories, our chronologies.

There is something powerful in the chronology of the physical world, something important that will be lost in the digital world, the digital world where things will co-exist in a flattened out band of information. Things will no longer be carved in stone and tangible, we will lose our  chronology, our anchors in time, and the monuments we share in the physical world.

Civilisation rises and falls, the centre cannot hold, and all things fall apart,
yet the shape of the fallen cities, traced in fragments, monuments, and patterns remains, ghostlike. AND ENCROACHES ON OUR PRESENT
In my series ‘Lost Cities’, I explore the passage of time through CAPTURED MOMENTS IN THE PRESENT, AND IN THE FRAGMENTS of what has been left behind.  The reamains of a Roman ampitheatre a window from the middle ages, a bronze age ring of stones.
I am interested in the way that we are floating, through time, racing into the uncharted future and reinventing the world as we go. I am interested in the way frames, photos, snapshots, capture something, and I am interested in breaking the space between these frames, the time they contain, and their surrounding. A kind of temporal cubism, breaking down the the time frame.
ARE WE FORCED to exist in THIS very narrow band of time, a perpetual present with no anchors to past or aspirations of future? This is being engineered through aggressive penetration by the media into our private spaces.
And yet as deeply as we are being pushed to live in the media saturated present, and despite the fact that technology is condemning us to a perpetual NOW, the traces of the past persist to remind us that it wasn’t always this way. And so the paintings become anchors in time, monuments to moments. The fragments of other worlds.
Edited by Walter Doyle.

‘The mind is its own place…’, Milton.

Different places on earth have different vital effluence, different polarity with different stars : call it what you like, but the spirit of place is a great reality. D.H.Lawrence

I have traveled far,  and followed maps through many cities, on many continents. My journeys have shown me the importance of place. Now we move further and faster through space, and our relationship to place has changed. It is this theme I explore in my paintings and mixed media works.

I contrast concrete places and monuments, with abandoned and transitional places, to reveal how we are continually building and reshaping the physical spaces, the cities we inhabit. Overlaying, discarding, and preserving, based on what we ‘collectively’ view as important in the shared spaces we occupy. I echo this process in my work, evoking, erasing and preserving certain lines. I start with concrete things and let them disintegrate. The end result is paintings which evoke places and their temporality. My work explores place, time, and space, and what it means to be here now leaving marks in paint, and colours; fading, racing towards the vanishing point.

And it is there in the vanishing point where things get very interesting. In my work it represents a point of departure, where matter meets mind and you enter a less material space. To some extent my work uses the concrete, and its physical processes to evoke and construct limitless spaces for the mind.

‘Bodies are becoming like cities, their temporal coordinates transformed into spatial ones. In a poetic condensation, history has been replaced by geography, stories by maps, memories by scenarios. We no longer perceive ourselves as continuity but as location, or rather dislocation in the urban/suburban cosmos. Past and future have been exchanged for icons: photos, postcards, and films cover their loss. A surplus of information attempts to control this evanescence of time by reducing it to a compulsive chronology. Process and change are now explained by cybernetic transformation, making it more and more difficult to distinguish between our organic and our technological selves. It is no longer possible to be rooted in history. Instead, we are connected to the topography of computer screens and video monitors, these give us the language and images that we require to reach others and see ourselves.

Almost a relic, the body is exercised and sanitized to glorification. It is the last refuge of identity. Like the vanishing city, the body remains as the only concrete proof of existence. Yet, scattered and fragmented under the weight of technology, body and city can’t be recovered by means other than those that displace them: they must be recorded or registered anew. Video replaces the personal diary. Made up of images, urban culture is like a hall of mirrors, its reflections reproduced to infinity. Confronted with their own technological images, the city and the body become ruins. Even technology is attacked by an obsolescence that renders it old instantly. We are faced with a transitory landscape, where new ruins continually pile up on each other. It is amid these ruins that we look for ourselves.^

In the Embers of Lost Beauty

This sums up my work at the moment. Wandering around Europe in awe of the crumbling beauty, the past lingering in lost places, year by year ancient buildings disintegrating in waves of urban erosion. Facades remain, propped up, and supported, straining under the weights and measures of time. Time keeps on slipping into the future, and as far as the eye can see concrete spills into the void,  and creates a certain lack of oxygen.

CUBIFICATION is a word I made up a few weeks ago to describe the contemporary experience. Cubification is the standardization of everything. Fittng into smaller and smaller spaces, organic spaces are becoming cubified. The seats on the train are smaller therefore you must be smaller. Each year the lines in the parking lots are redrawn smaller, your car should be smaller, in fact you shouldn’t have a car you should have a bike. Should and more should. Freedom is being filled with should and more and more people are telling you what you should do, wear, eat, and there is less and less space for freedom. Less freedom and less time, time is being cubified dissected into  smaller and smaller particles- Zeptoseconds- smaller and smaller divisions of time so you can get angrier and angrier at the person in front of you who has taken one zeptosecond too long to buy their ticket to get on the train which is now even smaller. Rage against the machine.

” The city no longer exists, except as a cultural ghost for tourists.” McLuhan

1- What’s on the other side of the vanishing point?

3 -Aether; the substance of light.

4 – from Shantaram by Gregory David Roberts